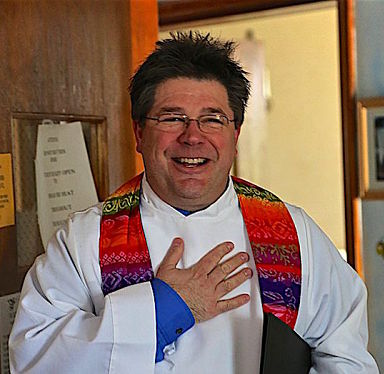 On Nov. 19, 2017, Rev. Todd B. Farnsworth became the 12th pastor of The Briarcliff Congregational Church.

Rev. Todd Farnsworth has been involved with ministries around issues of HIV/AIDS, Homelessness, Hunger, Domestic Violence, Trauma Awareness and Veterans’ needs. Todd has used his interest in theater to reach out to teens in his communities and he has been an active facilitator at Project New Hope retreats for veterans and their families. He is currently producing a play that speaks to the concerns of veterans returning home from service. Todd leads worship services at area nursing homes and enjoys visiting people who cannot easily get out to worship. He has recently begun exploring mystic practices such as meditation, centering prayer and tapping prayer.

Todd led a church to become Open and Affirming (ONA) in the early 2000’s, and before that received a State of Vermont AIDS Education Award in 1991. He says that being ONA is fundamental; his messages often relate to our daily lives and the world around us. He likes to be in the community and bring the congregation with him, and also believes in supporting members in their intentional ministries, involving youth in the service, and making pastoral needs a priority.

When he is not actively ministering, Todd enjoys walks with his wife, attending area theater, directing whodunnit mystery dinner plays, watercolor painting and visiting with friends and family. He and Martha throw a “wild” Oscar party for their closest friends each year…so stay tuned! Martha is a certified Preschool teacher. She is also a recreational gardener and looks forward to putting down roots locally. The Farnsworth’s grown children live in Brooklyn and Boston. Callie is a nanny by day and a director of original plays by night. Sam is employed at Boston University by day and is a playwright by night.

Todd earned his BA from American International College in Springfield MA in 1984, and his MDiv from Andover Newton Theological School in 1987. He was also ordained that year, and has served in Vermont and Massachusetts throughout his 30 years of ministry.

Todd and his (very patient) wife Martha are excited to explore outside of New England in the coming years, with a focus on Briarcliff Manor, New York and the Hudson Valley.